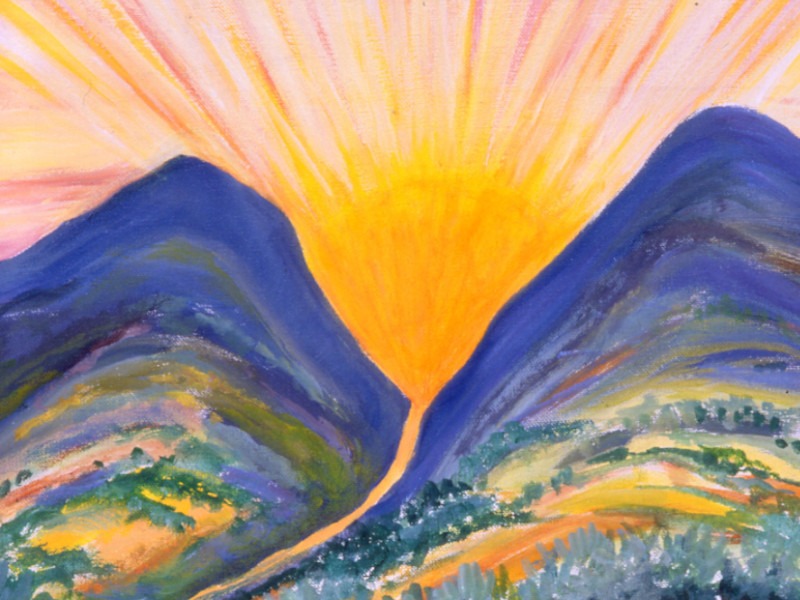 Kris, Lynsey, Nicky and Rhea – the Dance of Light team – wish you all a Happy Solstice.

In the northern part of the world, we find ourselves in the darkest time of the year. A time when we mark the shortest day and longest night by celebrating, and looking forward to, the eventual return of the lighter days toward spring.

This time of winter solstice was of great importance in pagan times: the start of the solar year, a celebration of light and the rebirth of the sun.

The light in the detail of this painting called ‘River of Light by Day’ by Rhea Quien, from the ‘Birth Dream’ series, indicates that light also streams forth to the earth carried by water.

Buddhists talk of en-light-enment, or the illuminating Light-of-the-Path. Meditation – the stilling of the mind – is an important practice within Buddhism. The idea of stillness exists in the word solstice itself, which comes from the Latin solstitium, which means sun standing still. At the moment of the solstice, the sun appears to stand still at the Tropic of Capricorn before it reverses direction and goes back the other way.

This titling away from the sun of the earth brings forth the dark time of the year. Light is reflected at night from the stars. The light is captured here in a the detail of another painting in the ‘Birth Dream’ series by Rhea called ‘Tree of Fire’. In the Southern Hemisphere darkness is slowly approaching. In Australia, with raging wild fires, this may be welcome, even if the change is slow.

Thus the revolving earth affects all life on earth not only through the change of the seasons but also the change within twenty hours.

And indeed, we have within us, on the emotional and spiritual level, lighter and darker aspects. We ‘see the light’ when we understand something, or we ‘are in the dark’ when we don’t understand an issue.

The winter solstice invites us to look at our duality, meditate upon on it and begin again.