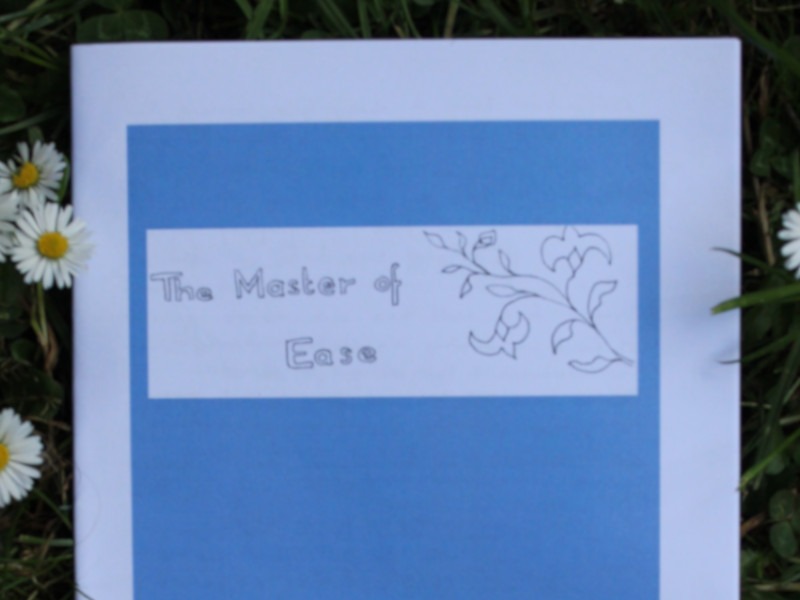 ‘Master of Ease’ by Rhea Quien, is a short, imaginative story for older children and adults about how our choices make a difference to the reality we create; how our thoughts can create our reality. This might seem like a challenging time to believe this. We have been ordered to radically and rapidly change our behaviour in small and large ways to contain the spread of coronavirus. Social distancing and self-isolation have left many feeling vulnerable, lonely and depressed. Working lives have been disrupted and, with that, anxiety about financial insecurity is growing. So many are going through this. However, as an alternative perspective, and in the absence of the obsession of productivity – of work and definition through our work –  can this time give us the opportunity to renew contact with our inner lives? We have the space to allow our minds to roam. We have the freedom of our inner reality.

Helen Monford, from Mayfield Primary School, and Marion Leeper, who was the Bard of Cambridge from 2016 – 17, talk about the ‘Master of Ease’ in this video clip.

“Everyone has a story to tell,” Marion Leeper says in the video above. As bard of Cambridge at the time of filming, she describes her job as being “to persuade everyone that they’ve got that spark of creativity inside them.” Could this time allow us to find new creative resources inside of us?

Like many artists, Rhea is dyslexic. She doesn’t know how to spell correctly. Ronald Dell Davis, the author of ‘The Gift of Dyslexia’, is also dyslexic. He noticed that his dyslexia wasn’t always the same and that sometimes it got worse. Through his practice as an artist he had the realisation that, when he was at his artistic best, he was also at his dyslexic worst. This insight was the beginning of Ron’s journey with assisting people to work with and overcome their dyslexia.

Every child grows, learns and develops differently and at their own pace. Rhea was told that Albert Einstein didn’t speak until he was four years old. He saw a friend hurt himself and asked, “Jack, what ails thee?” These were his very first words.

We invite children to search for Rhea’s mistakes in the written pages of ‘Master of Ease’.

The Master of Ease refers to concentration camps, so it is only suitable for children who know about them.

My friend was awaiting me at the rainbow gate. Tall he stood, with light around his shoulders. His eyes shone with love and down to earth sense of humour. Sometimes I has seen an expression so deep in his eyes, that it seemed I could see the whole world through them; and beyond, the features were ageless.

Today I could tell he had been waiting some time for me. There was an eagerness about him, a twinkle in his eye, a readiness in his movements. “Lets go” he said.

We entered a kind of ‘no state’ a fog or blank. After a little while I realised we were travelling swiftly in a small boat made of a glass-like opaque blue material. It was strong and pliable. The sea was calm with little waves catching the sunlight as they danced. We travelled together some time, just enjoying it.

Presently we came to a hilly island with pastures and woods. A small landing place of wood made the mooring of the boat easy. My friend helped me, after he had jumped onto the landing place and secured the boat. He took my hand and led me up a path through the fields. We climbed together up a hill, talking about this and that and enjoying each others company.

At the top of the hill I now caught sight of small, well-built castle of bright colours. “Is this where we are going?” I asked. “Yes” answered my friend. “We are expected there.”

After more climbing we came to a gate. A cordial person let us in. He had a plant-earth feeling to him. With gentle, strong hands he cared for the lovely garden, playing at growing plants of varied colours and shapes. The gardener directed us to the buildings. As we entered we were received open-heartedly and led through various light halls until we came to a large door. “Here we must let you go on alone.” said my friend. “I will await you here.” I was somewhat surprised and also aware of my growing curiosity and expectancy.

Cautiously I opened the large, heavy door. It led into a light passage at the end of which stood another door. As I walked through, I caught sight of some letters above the second door. They read “The Master of Ease” in broad, light letters on a dark background. This door was dark. In spite of the title I now felt hesitant. It took me some time before I knocked.

A low, soft voice said: “Come in.” On opening the door, I perceived a room of about right metres by eight metres, dark and warm. In the corner opposite the door to the right was a tiny fire. A few pieces of furniture, chairs and tables, stood around, but the room was almost empty.

Where had the voice come from? I entered and let my eyes adjust to the dark It was pleasantly quiet. I knew someone was in the room, but where? I made a step forward into the room. “Hello” said a voice. “Please do come closer.” It was a warm, soft, deep male voice, but somehow also small. I took a few more steps. “Yes, do come this way.” said the voice again. The voice seemed to come from the direction of the little fire. As I come closer, I caught sight of a movement. A small being, sitting near the little fire, had stretched out his hands towards me.

Silently I looked at him. He was barely more then one and a half feet high with a round body, brown and a little furry. He had an enormous smile, almost from ear to ear, and most observant, intelligent eyes peered out from under a bushy mop of soft, brown hair. Long ears framed his face either side.

“Hello,” I said suddenly.
“Well, hello” came the broad, warm voice. “Do come close and make yourself at ease.”

“Are you the Master of Ease?” I asked, not believing it one moment.
“He I am.” he replied.

I tried now to come close to him, but I was so big, so tall, I could get nowhere near him to even greet him properly.

“It’s a bit awkward, isn’t it?” he chuckled. I tried again to approach him, unable to do so. I now felt clumsy, and embarrassed. “Hmm – would you like to come closer?” asked the Master of Ease. When I confirmed this he replied: “Then would you be willing to change?” I thought a moment. What would this mean? Did I trust this funny, little, fairy chap? Then I heard myself say: “Yes.” The instant I agreed I started to shrink. From my usual size I became smaller and smaller. I heard myself go “Oh!” and then, almost with a bump, I arrived at the size of the Master of Ease.

“That’s better” he said, as he came over and warmly took my brown, hairy hand in his, and stoked away the bewildered expression on my face. “Now we can have a good talk.”

I glanced around the now enormous room, and I laughed as I saw the chairs and table tower room high over me. “You can’t use the furniture in your room! I exclaimed. “I don’t need to” said the Master. Then how do you sit and eat or do other things? I asked. The Master took me to the little fire and we squatted on a rug. He fetched a pot from the fire and poured out some delicious smelling chunky stew into two bowls. Contentedly we munched and slurped.

“Now what shall we do?” I asked, patting my round, full belly. “What would you like to do?” came the question. “I’d like to play, but there is nothing to play with,” I said. Instantly a box, about eight by four inches, appeared out of the ground before me. It was metal with semiprecious stones arranged in patterns on the lid. Eagerly I opened the lid. Inside were houses, roads, fountains, temples, churches, railways, boats, steams, woods, meadows and cows, clouds, many people of all races and kinds, farmers, children, gardeners, composers, chimney sweepers… scientists, priests, milkmen, shopkeepers…

I took out some houses and started to arrange them on the floor. Then came smoke from the chimneys, a road, a fountain at a corner, a postman delivering mail, a housewife opening the door to let in the morning sunshine, a doctor driving home after a night of work…More things appeared and the town became complex: a post office, a church, shops, cars. Buses and bikes, a bank and a prison. Was there a prison in the box? Yes. I looked deeper and saw some open countryside. There was a high, barber wire fence and a concentration camp. I took it our of the box and help it up to the Master of Ease. “Does this really also come out of the toy box?” He looked at me intently for a moment: Have you still not understood that whatever you create with your thoughts is in the toy box? Do you want to play with the concentration camp and the prison?”

My mind went blank. I felt a kind of gaping hole in my belly. The toy box, the fire, the Master of Ease blurred and vanished. Oh, please, don’t do this to me!” I cried. “where is the toy box? May I look in the toy box again?” With utmost effort I tried to perceive the room again, the Master and the toy box. I could not! In desperation I sank down on the mat and rolled over on my fat tommy and slapped my furry, brown hands over my head.

I slapped my furry brown hands over my head …!!! I still was the shape of the master of Ease! Quickly I rolled over and sat up. In front of me was the toy box, open. Opposite me squatted the Master of Ease intently observing me. His heart had grown so big it filled the whole of his body and his love poured out through every pore of his rough skin. He was pulsating a soft, warm red glow.

I looked inside and saw animals of all kinds, free and unafraid, fresh streams, flourishing woods, seas full of fish and whales. And people, yes, people too, living in small groups here and there. They were working the soil with their hands, cultivating, healing and nourishing the plants and animals with great sensitivity, knowledge and skill. Out of the blossoming of love they understood the vibrations of sound and colour in every cell, every atom. They used their great intelligence in technology to work with the nature spirits, with angels, with the Earth.

My friend help open the big door as I came through the light corridor. He laughed and took my hand. Together we walked through the halls, the garden, the gate and down the path and hopped into the waiting boat He untied the boat and ever more speedily it leaped over waves of clean, blue water in which we watched the play of the dolphins. We entered the ‘no – state’ state or blank, and arrived at the rainbow gate. We hugged and wished each other farewell.

Written by Rhea Quien (once Monro) in 1990 in Fernblick, near Teufen, Switzerland.